White Spaghetti, or Espagueti Blanco, is a Mexican dish that I learned about from my mother in law. Me and my daughters can’t get enough of these noodles!

It’s a super simple dish that’s very easy to make. I love to eat the spaghetti on it’s own, but it’s also commonly paired with breaded chicken, or pollo empanisado.

My mother in law makes her white spaghetti with lots of bay leaves, that give the noodles SO much delicious flavor. Keep reading for the recipe my husband grew up on!

Start by preheating your oven to 350 degrees. Spray a 9×13 dish with nonstick cooking spray and set aside.

Once noodles are done, drain them and leave them in the strainer.

While noodles are draining, turn the stove back on to medium heat and add the butter and garlic to the same pot you used to cook the noodles in. Cook for about a minute or two, until the butter is completely melted.

Next, add the cream and salt to the pot and stir. Cook for another minute or two, just enough to warm up the cream, and then turn off the stove.

Pour the drained noodles into the pot and mix well. Make sure all the noodles are covered in sauce.

Pour the noodles into the 9×13 casserole dish that you prepared earlier, and spread them evenly.

Crumble the queso fresco (cheese) and sprinkle about half on top of the noodles. (Save the rest for topping later.)

Next, lay the bay leaves on top of the cheese.

Gently mix everything and spread the noodles evenly in the dish again. Sprinkle the rest of the cheese on top, and bake for about 20-25 minutes.

Remove from oven and let cool for about 5 minutes. Serve immediately and enjoy! (Make sure to remove the bay leaves as your serving each plate.)

WHAT TO SERVE WITH WHITE SPAGHETTI

Some people make this recipe with chopped ham mixed in. Other people serve it with breaded chicken. Another easier option is to mix in some shredded rotisserie chicken, or my slow cooker Italian chicken. There are lots of things you can add to this, including fresh veggies. 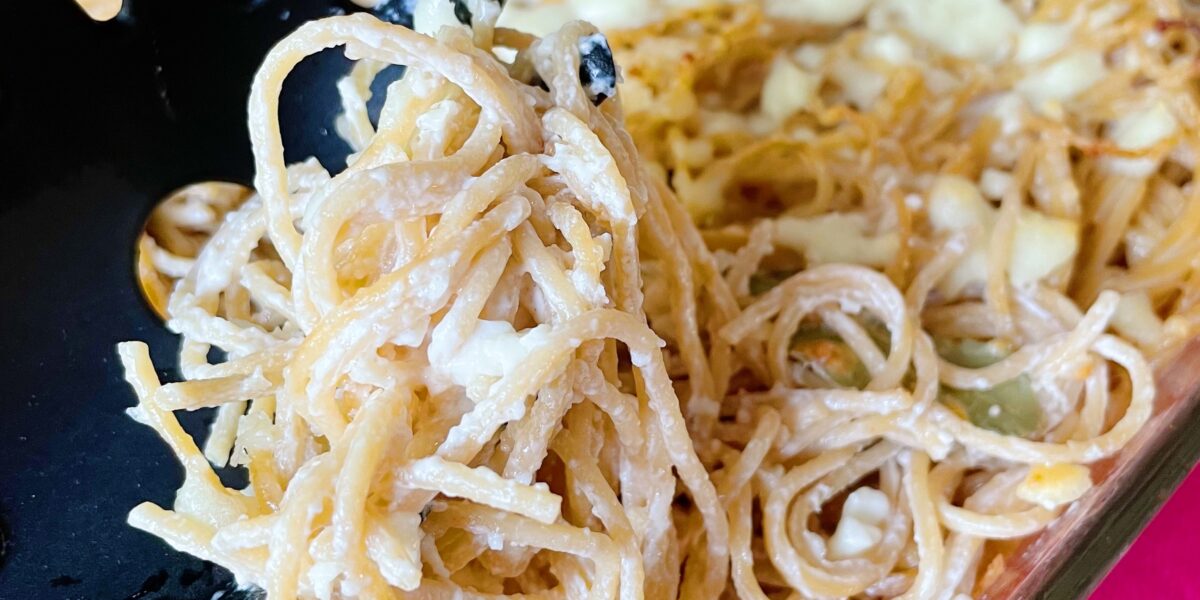 A simple Mexican dish where spaghetti noodles are tossed in a delicious, tangy white cream sauce.

If you try this, let me know what you think in the comments!