I remember the days before my first daughter was born when I’d be out at a restaurant and see a family at a table with their kids glued to a phone or tablet and I found myself judging them. How can that be good for them? Shouldn’t the dinner table, at the very least, be free from electronics?

I remember many occasions where I vowed that when I had children, they would not be allowed on phones or tablets until an older age. I would find alternative ways of playing with them and teaching them. We would sing songs and I would read them at least ten books a day. We would play outside often. We would do lots of arts and crafts.

Man, was I naive.

I turned to television and electronics to entertain Kaia much earlier than I am proud to admit. I’m not even quite sure why or how I started relying on electronics so much. It feels like it just happened – and then progressed quickly.

At two and a half years old, my daughter’s tablet is very much a part of her everyday life. At first, I tried to control everything she watched. I felt that as long as it was educational or a simple cartoon, then it couldn’t be too bad for her. Anything but those videos of surprise eggs or kids opening toys, right?

Again, I was wrong.

I found out soon that it wasn’t so easy to control every single show or video that my daughter watched. I tried to be next to her as much as I could to monitor what she was watching but I couldn’t be next to her every second. It wasn’t long before she was watching anything from Mickey Mouse Clubhouse to videos of people playing with toys. I felt like I had completely lost the battle with electronics and she was only two.

What I didn’t quite realize yet was just how much I, myself, was a huge part of the problem. I finally came to this realization over the past weekend.

We were at the beach and had just laid out our towels. I had forgotten the beach toys at home so I didn’t have anything to entertain our daughter with. I immediately felt a sense of worry. What is she going to do? How can we enjoy this beach outing if she doesn’t have anything to play with? My thoughts quickly turned to how I could always offer her my phone. Sad, I know.

As I sat there wondering what she was going to do, she started playing with her dad. They started running around and were genuinely enjoying hanging out together. It made me so happy to see them laugh and play together. My husband works very long hours during the week so unfortunately, he doesn’t get this kind of time with her as often as either of them would like. 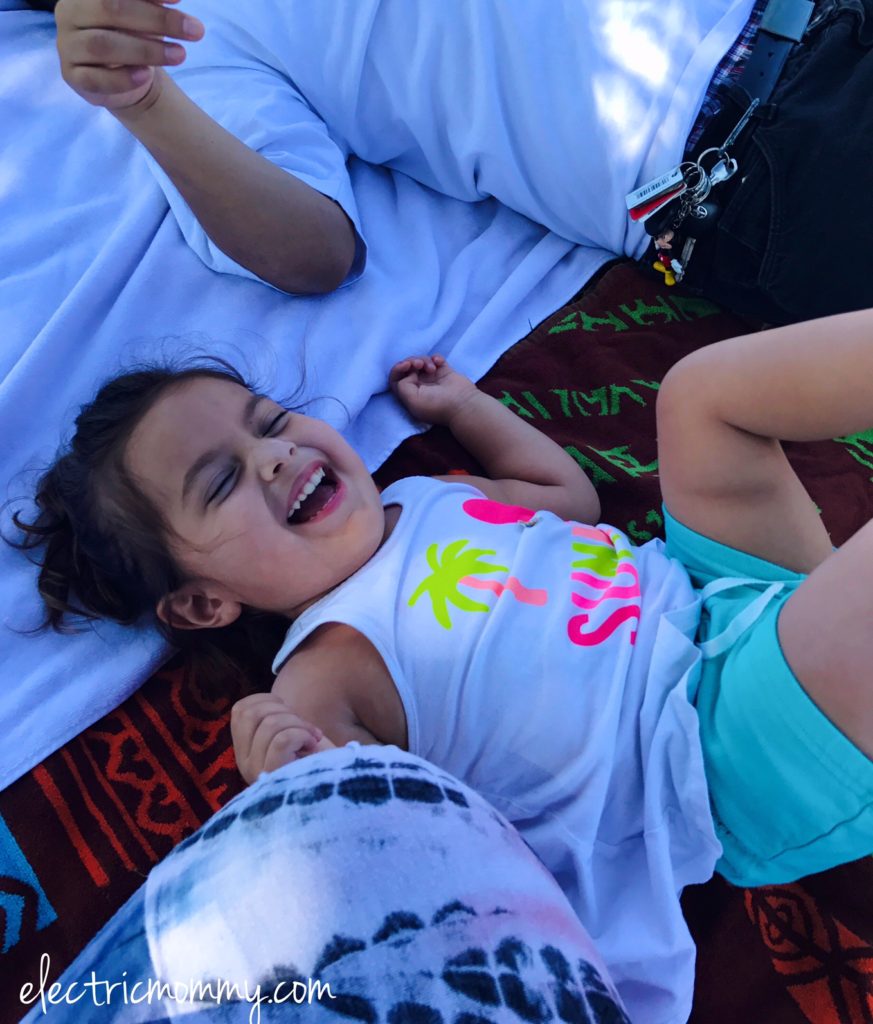 Kaia then became very interested in watching the birds that were walking around our towels. My husband got up at one point to get us something to eat from the snack bar and a bird came and walked right across his towel. This was a very fascinating event in my daughter’s eyes.

Eventually, two hours passed before we got up from our spot to check out the water. I couldn’t believe how amazing those two hours were! Without electronics.

This got me thinking – did my daughter ever even ask for my phone during that time? No. I was the one who was initially going to reach for it to keep her occupied. A part of me felt embarrassed and ashamed. How did it even get to this point? Why was I so afraid to let her just be bored and find her own ways to play?

Up until this beach experience, I truly didn’t realize how much it was myself that relied on a phone or tablet for her entertainment more than she even really wanted it. I could see how much she truly enjoyed spending time with her dad and I, much more than she enjoyed being on some device.

I made a conscious decision then to change how we use electronics in our house. I am not saying that we’re going to do away with them altogether. I just don’t feel that’s realistic for us right now and I do feel they can be beneficial in certain situations. What I am going to do more of though, is let her be bored. As we sat there on the beach, I was amazed at how easily she could entertain herself with whatever was around. I need to give her more credit and allow her to just play and use her imagination. 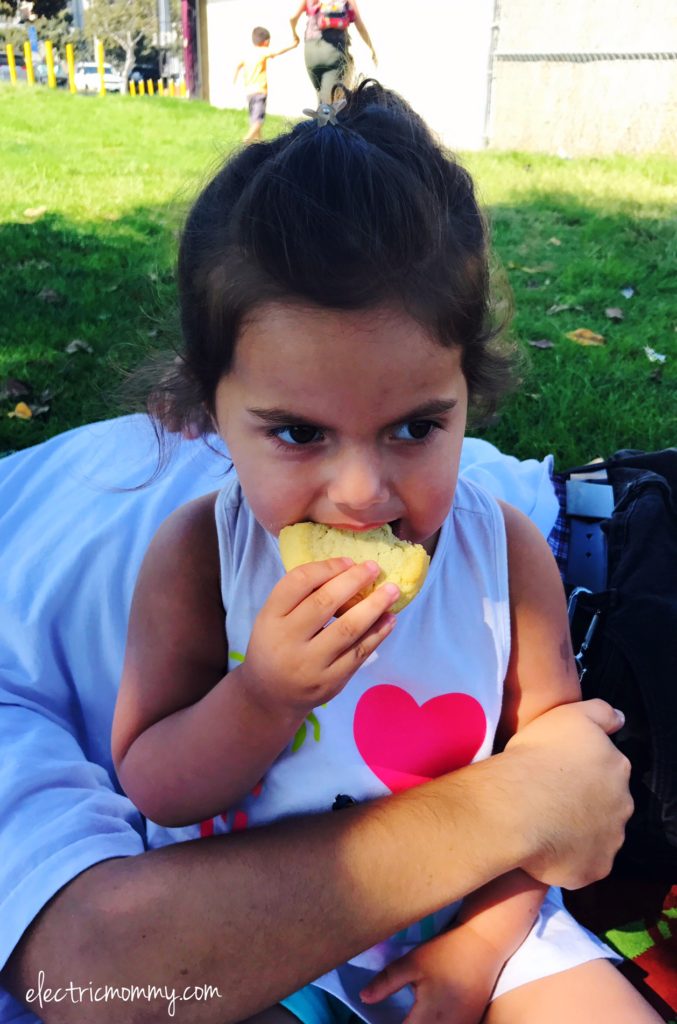 This week has already been better because of this change. For one, we’ve spent more time outside. I used to worry that because we don’t have some huge playground or tons of outdoor toys for her that somehow, she wouldn’t have fun. Again, I completely underestimated her. Our time outside this week has been amazing and all with just a hose, bubbles, chalk and some bouncy balls. 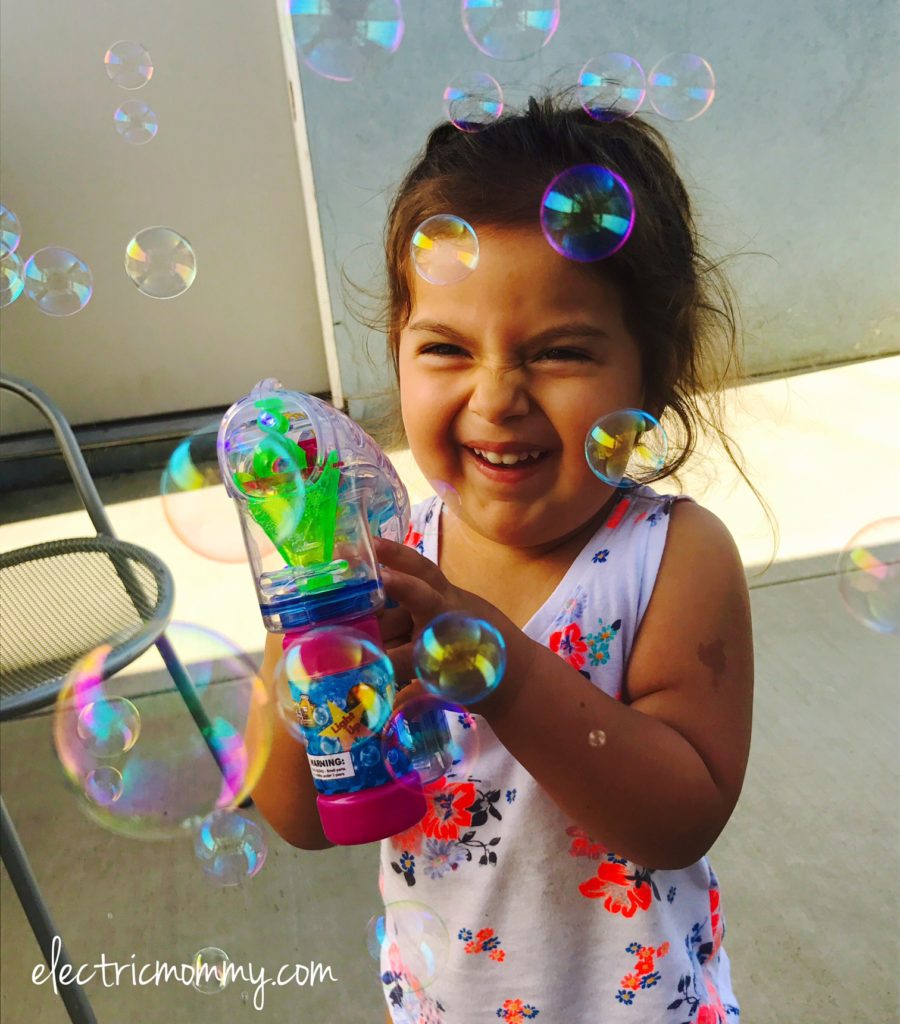 I feel that I should say here that since becoming a parent, I have tried to leave my judgmental days in the past. We are all trying our best and we each have our own way of doing things. As far as electronics go, I don’t think there’s anything wrong with parents allowing kids to use them just as I don’t think there’s anything wrong with parents who don’t allow their kids to use them at all. I love hearing from both sides and learning how each family incorporates technology into their lives differently.

What activities do your kids enjoy outside of electronics? I could use some ideas and would love to hear some of your kids favorite activities!