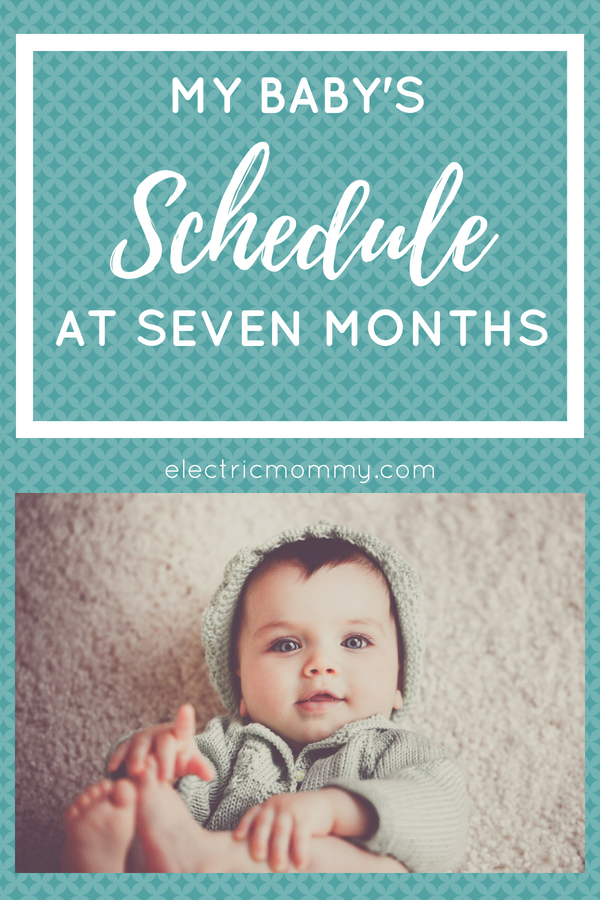 Here is what my baby’s schedule looks like right now. It took forever to get some consistency in our day but we are getting there, slowly but surely! 🙂

I can’t believe baby Stella is getting close to eight months old! I know everyone says it, but time really does fly.

If you’ve been following along with my blog, you know that we’ve had a rough start with baby Stella. First, right after she was born, I just couldn’t bond with her. I had a tough time clicking with her and part of that was due to her acid reflux. She was not an easy baby to comfort and she cried often. It was hard as a mom feeling like I couldn’t comfort my own baby.

It took a few months before we figured out what worked best for her and her reflux. (If you are interested in what ended up working for her, feel free to check out my post My Acid Reflux Baby and What Works for Her.)

During this time, I also dealt with some severe depression. I was having horrible thoughts and often wondered whether or not I should have had a second baby. Then, after thinking these thoughts, guilt would consume me.

The first six months or so were extremely hard – and I mean HARD. Baby Stella is very different from her older sister and she does things her own way. I think it’s hard when your first child is very much one way and then your second one is the complete opposite. It’s almost like you have to learn how to parent all over again because you are dealing with a much different personality.

I did, however, come across a blog that I found extremely helpful. It’s ThinkBaby.org and it is great for any mom with a baby! It has a lot of great information related to not only babies, but also important topics related to motherhood, like self-care. I highly recommend checking it out.

Day after day, I wondered when my baby would settle into some kind of schedule, ANY schedule at all. She was on her own time. She didn’t sleep much during the day and at night, she woke up a minimum of 2-3 times. Those days felt like they would never end.

I used to read posts from other moms and see the schedules their babies were on and I would feel like my Stella wasn’t even close to theirs. No matter how hard I tried, she just wouldn’t fall into any kind of schedule. She did things her way and it was very hard for me to adjust at first.

Now, I am happy to say that Stella has FINALLY settled into a consistent daily routine. I never thought we would get here but we did!

Here is an example of what a typical day at home looks like for my seven and a half month old:

5:00am: Wakes up. Usually, she isn’t interested in eating much. She’s just very happy and awake and ready to “talk” and play.

6:00am: She will take a bottle but still doesn’t drink much in the morning; maybe 3-4 ounces at the most.

7:30am: Breakfast. This is when I feed both her and her sister. Right now, Stella is still in the very early stages of food but she loves bananas, sweet potato and avocados. I am feeding her real food three times a day right now. As long as she is awake, I feed her at the same time as her sister. It makes it easier for me this way.

10:15am: Drinks four ounce bottle. After her bottle, it’s play time. My baby is extremely active. She doesn’t like to be held at all. She constantly needs a toy or wants to be mobile, meaning crawling around on the floor. She also loves her jumper. (Check out this post here to see what jumper she loves. It is the best and way cheaper than most of the others.) I have learned to set up different “stations” so that when she gets bored in one spot, I move her to another place.

11:30am: Lunch. This is when her and her sister have lunch together. (Again, for Stella, it is still very early stage foods.)

12:30pm – 2:30pm: NAP TIME! This is when I have actually gotten BOTH girls to go down for naps! (This is most of the time. Obviously, some days, the baby is just completely off. Her teething has been especially bad so sometimes that throws things off but most days they both go down at 12:30pm.)

2:30pm: Stella wakes up and has a four ounce bottle.

4:30pm: She will have another four ounce bottle and then go down for her last nap of the day.

5:30pm: Play time. Daddy usually gets home around 6:30pm and takes over from there. He will usually spend a good half hour with her.

7:00pm – Bedtime routine starts. She typically drinks about four ounces and then we get ready to lay her down for bed. We rock her for just a couple minutes, put on her white noise machine, and walk out of the room. Half the time she goes to sleep on her own without us having to do anything else. The other half of the time, she continues to play in her bed for a while until she wears herself out. We just keep checking on her and re-wrapping her in her blanket until she eventually falls asleep. 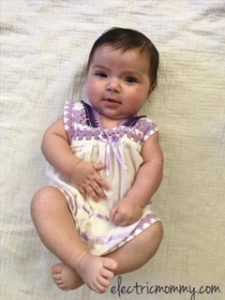 That is her daytime routine! I am sooooo happy she finally has a more consistent schedule. It is definitely making everything a little easier.

After her bottle, we lay her back down and she goes right back to sleep. I don’t think she ever fully wakes up during this feed. However, she is still waking up at random times during the night. We are in the process of weaning her off nighttime bottles but it is taking some time.

That’s where we are at! If you are a mom whose baby just won’t sleep, or doesn’t take any naps, or cries all the time, or is difficult to bond with, I promise you it will not last forever. It sure as hell feels like it will. I know, I remember very well how long these last six months or so have felt.

It does get better though, it always does. 🙂